A solid foundation is needed for any serious  endeavor. We recommend strongly, that you get that from the book and the home- study course.  We have also provided dozens of full free tutorials to increase your understanding.  Give yourself something solid to build upon.

Learn to set your own scans with our tutorial on Tc2000®Easy Scan . 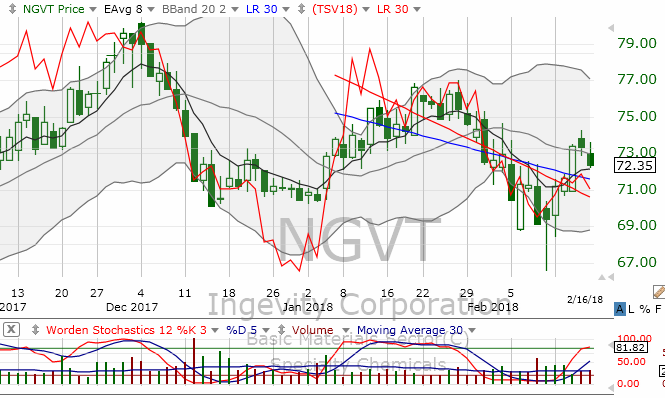 Wind to our Backs!  Rolling Stocks

Some stocks will roll back and forth within a channel, between a high and a low price. Once a stock is identified it should be easy to buy low and to sell high.

That is always good advice for a would-be successful investor.  It is also quite useless since we never know exactly where the highs or the lows will be. However, with the computer tools available today, it is much easier to reduce the risk and to anticipate potential stock price moves. Armed with this information, rolling stocks that move between predictable channels can serve to fatten our bank account. Suppose we had invested $1,000 in General Electric in 1988 (260 shares) see Fig. 1: 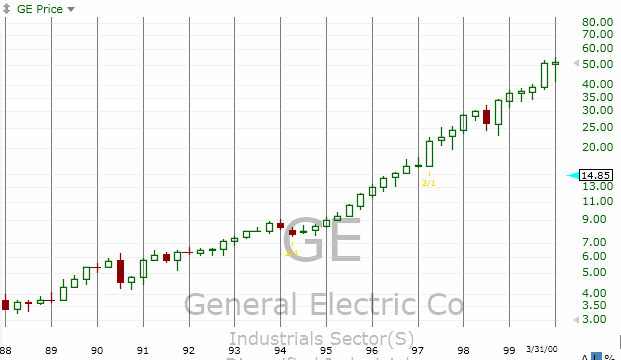 That’s not bad!  That is why our parents and grandparents were so hooked on “Buy and Hold!”  Multitudes of retirement plans were funded by that type increase.  But let’s see what’s happened to GE’s stock price later in Fig. 2.

To illustrate, take just a portion of the last ten years, say from 2004 to 2008 and exercise the Trader skill for comparison.  Working only the flat portion of the above chart (between ’04 and ’07), the trader looks to capitalize on both the up-moves and down-moves during this time frame.  Opportunities to capture short gains on good rolling stocks are shown on Fig. 3.

Notice that trades were taken in both directions, shorting stocks on the downside and going long on the up.  Fourteen such trades are shown, which if maximum gains were made, our $1,000 initial investment increased to over $3,300 (230% in four years).  Of course we won’t capture all that gain, but if we captured half the potential we would end up with over $1,600 (60%).  Compare that with the Buy & Hope return over the same four year period of  -50%. The purpose here is to show the potential for higher returns on stock purchases by working the “rolling” nature of some rolling stocks. Notice the yellow highlight on the previous chart.  This is a consolidating stock pattern with no noticeable trend.  Stock patterns spend roughly one third of the time in sideways patterns such as this.  It is a time of indecision, with buyers and sellers in some balance, happy with the status quo.  Stock patterns such as this are often called “Rolling Stocks.”  Finding stocks that “roll” and choosing buy-sell signals to produce cash flow is the point of this guideline.

So how do we take advantage of this rolling stock strategy (some call it “Surfing” or “Channeling” the market)?

Read about the two handicaps that must be overcome using “Rolling Stocks” in Chapter 2 of our book: “Provident Investing.”

If the calculated return is less than about 6%, don’t waste your time.

Most good rolling stocks settle into a rolling pattern as a result of a decline from a higher trading range. This is a powerful signal to help you spot an emerging roller.

I’ve traded rolling stocks since the late ’90s with a watch-list of potential rollers, updated weekly with a rolling-stock scan.  Following are tickers recently flagged as potentials. 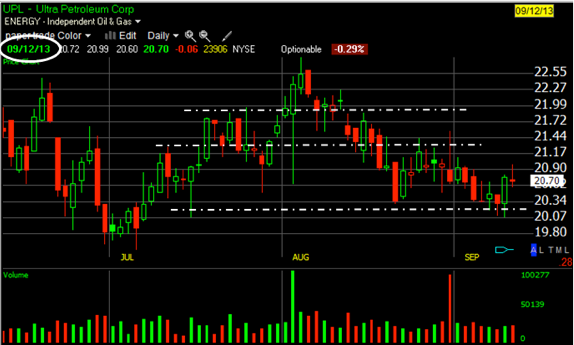 1a.  This ticker (UPL) looked good (Fig. 4a), ready to roll up to some resistance level.  It is unclear what that resistance level will be, with two options shown with the white dashed lines.  It could even be the peak ($22.60), but that is unlikely, so far back.  Here is what it did: 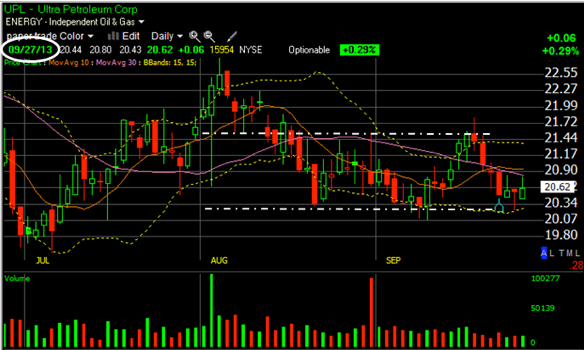 Fig. 4b  UPL with a good balanced roll.

1b.  While this is a good looking roll, Fig, 4b, the price change is only a 7% potential gain, if we got in at the very bottom and out at the very top. 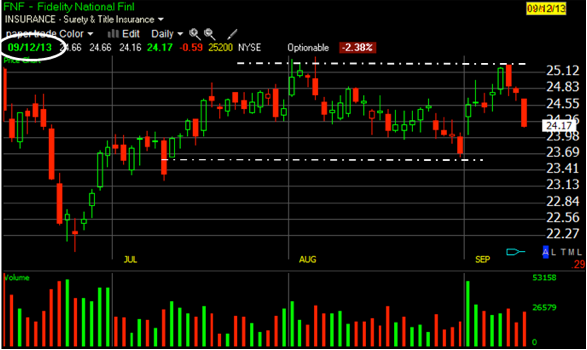 Fig 5a   FNF between support and resistance.

2b.  The next day brought a big surprise (Fig. 5b), punching up the value of Candlestick principles: 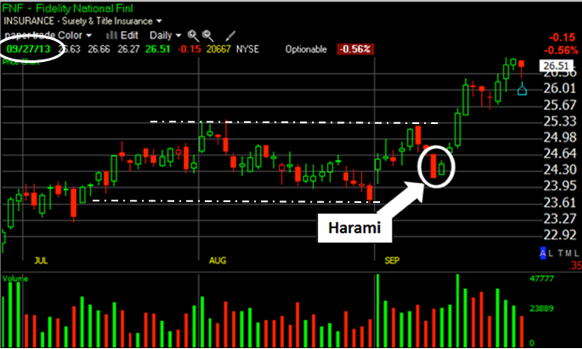 Fig. 5b   FNE with a standout Candle pattern called the “Harami.”>/div>

3.  The definition of a Harami is copied from our recent Candle Corner Guideline:

“A Harami occurs whenever a long day is followed by a shorter day of opposite color.  The open and close prices designate if the second candle satisfies the requirement.  That is, the shadows are  not relavent.  A bullish Harami (Fig. 6a) has had a downtrend in place for some time with the latest candle in the downtrend is followed by a shorter bar of opposite color.  The Harami definition requires the open and close of the white candle be within those of the preceding black candle. The opposite can be said about bearish Harami in Fig. 6b.  In this case, the increasing trend is shocked by the reversal and provides a turning point in the pattern.”

4.  The message of a Harami is potential trend reversal.  Look at Fig. 5b above to see how that Harami played out.  An alert trader would have positioned him/her self to take advantage of the potential price increase.  (with appropriate money management steps for risk control)

5a.  GXP has dropped from a $24.00 high and has flattened out, signaling a possible trading range.  Let’s see what it did? 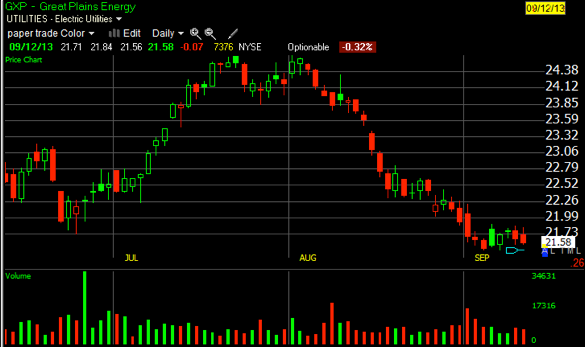 Fig. 7a  GXP moving to a potential roll.

5b.  In this case the plan worked out with a decent roll being formed as shown in Fig. 7b.  This ticker is one to watch (roll 6%). 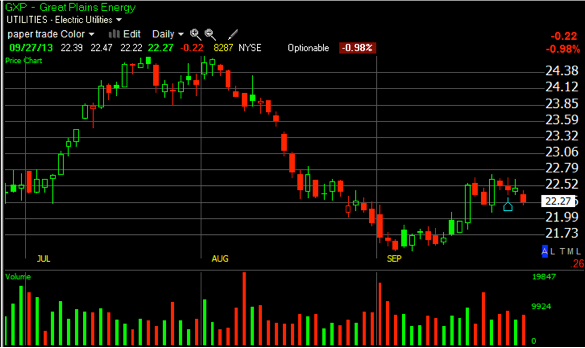 Fig. 7b  GXP moving into a positive roll position.

6.  Many good rolling stocks settle into a rolling pattern as a result of a decline from a higher trading range. This is a powerful signal to help you spot an emerging roller

Look at the profitable rolls this stock put together since! 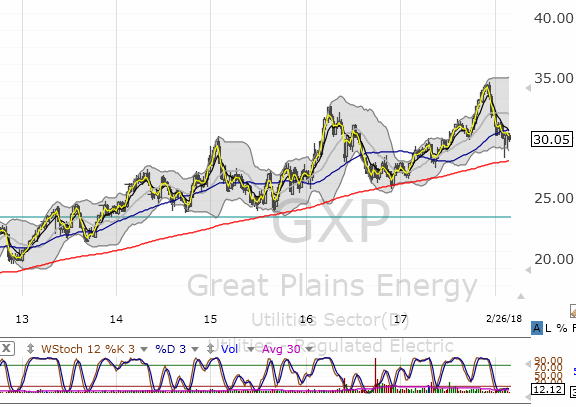 You will find a link to our tutorial on Worden’s ®Easy Scan. It is also offered in Products. Learn with our products

Using it with https://www.tc2000.com/  or http://Freestockcharts.com, you will learn to set your own scans.  This will greatly reduce your time searching for the best possibilities.

I have to credit you with having written an outstanding introductory guide to trading. I think any new trader would be very interested in reading and studying your book. I must also compliment you on your writing style. It is extremely easy to read and flows very coherently with each chapter building logically on the END_OF_DOCUMENT_TOKEN_TO_BE_REPLACED

Bob, years ago you told me that trading is not like a trip to Vegas where you ‘pays your money and takes your chances’.  You simply said any new medium takes some measure of education and mentoring and you used plumbing as an example.   I bought your materials.  I put Freestockcharts.com on favorite places END_OF_DOCUMENT_TOKEN_TO_BE_REPLACED

I used to spend evenings playing several games to unwind. I was part of a community online that became virtual friends. Fun! I switched gears after stumbling onto your site, and have given up games but have made paper trading a game- seeing if I could gain more than I lost. I get it!!! I END_OF_DOCUMENT_TOKEN_TO_BE_REPLACED

This book is  just what I was looking for.  My son is working toward an American Business merit badge.  Requirement #3 is an exercise in the stock market.  I suggested and he wanted, a little deeper understanding.  He read it in a couple of nights and found it easy to understand.  Would you consider discounting END_OF_DOCUMENT_TOKEN_TO_BE_REPLACED